When Aaron and Mark found these two live turtles ready to be sold for meat on a Papua New Guinea market, they couldn’t let them to their sad fate. Instead, they bought them with their own money and drove them to the nearest beach to the Pacific Ocean.

Aaron Culling shared this small adventure to his Facebook account with the caption: “Found these at a local market. Got them for 50 bucks, drove 5km up the road and let them go.” He later told the complete story of how he spotted these two endangered sea turtles at a PNG market with his co-worker Mark. The decision to free them was easy, as Aaron had already saved 9 other marine turtles in the same way, earning him the “Ninja turtle” nickname from his friends… Like a comic-book hero dedicated to protecting the innocent, except that these innocents are not citizens of New York but endangered reptiles. 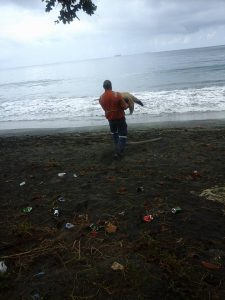 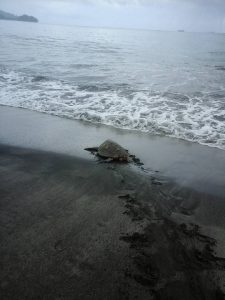 Aaron posted the release of these two turtles in December 2015, and the publication has since been shared almost 100k times, with international press coverage. A lot of fellow Papuan hailed them as heroes as well, in a testimony to the culture war happening in PNG right now on the turtle subject. The latest data shows that about three-quarters of the 42 000 marine turtles illegally caught around the world every year are captured in the Melanesian country. A sad record, with Nicaragua and Australia completing this podium.

80% of the turtles caught in PNG are green sea turtles, an endangered species in the Pacific Ocean. The green turtles are a victim of plastic and chemical pollution, by-catch from industrial fishing nets, and tourism on the beaches it uses to lay its eggs. Big populations are at risk of collapsing. So under the Convention on International Trade in Endangered Species, it is illegal to import, export, kill, capture or harass green turtles. But in the Pacific, a lot of fishers still capture the gentle creatures, arguing that it is a traditional food source for their community. They have been opposed by conservationists, individuals such as Aaron and Mark, and, increasingly, by the general public.

We have seen this process happen in the rest of the Pacific. Once public opinion shifts, turtle hunters become poachers and turtle meat moves entirely to the black market. A change that seems to be happening in PNG as well…