Tahiti just lost its world record for biggest ukulele ensemble, obtained in April 2015. This Polynesian people proudly kept the title for one year and a half, until a church from Hong Kong (pictured above) got the best of them. The Chinese gathered 6125 players for New Year, pulverizing the 4792 players mobilized in Tahiti. 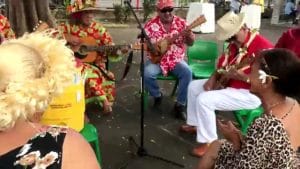 In the Tahitian media, calls for a new attempt at the record have been heard immediately after the new Guinness World Record was shared on Facebook. The same day, local TV channel TNTV caught on film the Polynesian president jamming with a ukulele, as if training for the record.

Newspaper Tahiti Infos even recalled that during the successful record breaking attempt, organised by the Minister of Culture, the local government promised to mobilise a stadium to get to 10 000 players if the record was even broken. The fact that there are 5000 Chinese for every Tahitian doesn’t seem to deter them.

The real question now is if Hawaii, where the ukulele was actually invented, will enter the fray and compete for this world record…