(A solar farm in Samoa. Credit for the picture: © DANIEL LIN – National Geographics)

There is a rising focus on green energy technologies in several countries around the Pacific Ocean area. These are potentially game changers, promising a quick adaptation to the challenges we are facing in our modern era, particularly climate change and its present consequences, such as a higher frequency of natural disasters and the rise of sea levels. Moreover, these new technologies come with a great benefit, and this one is economical: they reduce the expenses of nations and their communities.

The reign of sun power is coming faster than ever

In these past years, the cost of photovoltaic has drastically fallen: 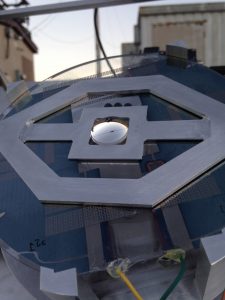 And the technology to harvest the energy carried by the sunlight keeps getting more efficient each month, thanks to the scientists who work hard all around the world on the matter. Last week, for example, the USA Penn State University researchers have obtained 30 % average efficiency compared to the actual 17 % with an experimental automatic device tracking the sunlight throughout the day without moving around, needing no more space than a “traditional” panel. And this was done with the use of actual silicon materials.

This could quickly lead to photovoltaic panels producing more than twice the actual output. There are numerous experiments around the world on different sunlight harvesting technologies, including the use of new materials, which are quite promising. In the end, we can be assured that sun energy is quickly getting cheaper and more efficient.

Elon Musk’s Tesla on the frontline

On the matter of electric transition, we must also thank visionaries and modern captains of industry like Elon Musk, struggling this last decade to trigger the energy shift “towards the sun”. First with Tesla, his revolutionary Electric Vehicle company, then with electrical devices like the Powerwall home intelligent battery, and lately with his solar roof.

Several countries of the Pacific, which are urged to use the energetic ressources the sun provides plentifully in these regions, have engaged or are engaging partnerships with Tesla.

Earlier this year, The island of Ta’u in American Samoa replaced its diesel energy based system with a solar micro grid from Tesla’s SolarCity.

Lately, the 7th of July, The Guardian announced the construction of the world’s largest lithium-ion battery (129MWh) in South Australia by Tesla and French utility partner Neon, designed to store renewable energies and improve the security of electrical networks. Lets remember that Elon Musk had pledged on Twitter to achieve this gigantic challenge in 100 days or deliver the whole structure for free. The state government confirmed that Elon’s pledge had been included in the contract. Good luck!

China, the most aggressive player on the Electrical Vehicle market

The same Elon Musk reported that China was much more aggressive with its environmental policies than any other countries, including the US & European nations. He made this statement a few weeks ago during the annual summer meeting of the National Governors association, in Providence, Rhode island.

He told the audience that the Chinese government was putting heavy pressure on its own car manufacturers to the point that, as he stated according to futurism.com, “the coalition of Chinese car manufacturers just wrote the Chinese government to beg them to slow down the mandate, because it’s too much. They need to make 8 percent electric vehicles in the next year or in two years or something; they can’t physically do it… China’s by far the most aggressive on electric vehicles and solar”. Reports on Tesla’s project of constructing a Gigantic factory in China may explain how Musk acquired such knowledge.

Other great Pacifican nations in the sun tech race

However, China’s not the only one of the countries bordering the West Pacific to focus on sun techs. Australia, which has plenty of sun to spare with its gigantic desert areas, and has the world’s biggest lithium-ion battery under construction to store it, is also on the go. Proactiveinvestors.com.au announced two days ago that Greatcell Solar, located in Australia and JinkoSolar, one of the world’s largest photovoltaic panels manufacturer, have signed a non-binding agreement to commercialize new technology: third-generation photovoltaics with competitive advantages compared to actual silicon panels.

And there is Japan, too, with Toyota integrating the convergence of the 2 pre-cited technologies. Panasonic announced earlier this year that a solar roof, with a triple efficiency compared to the standard ones, are to be incorporated in the Toyota Prius Prime, a Japanese plug-in hybrid car. It should enable the Electric Vehicle to increase its 25 miles autonomy on a fully charged battery by 3,7 miles on a sunny day… It might look not significant at this stage, but it is only the beginning and things are moving faster as time goes by.

Again, Elon Musk also tweeted last year that he wanted his Tesla Model 3 EV to integrate the same tech, as an option.

As we can see, there is a convergence of multiple new electrical technologies. We hope we will be able soon, here in the Pacific, to travel around our Ocean cheaply or even freely on green energies powered boats like this one.