It is a staple of Pacifican and Asian food, yet taro is fast disappearing from our plates. Potatoes and flour are taking its place, and people gladly forget the bland traditional vegetable. But at Pacificans we still like the full texture, unique taste, purple color of taro root, as well as its ability to quench the most urgent hunger… We found a Samoan mom who offers the solution.

In Tahiti we like our taro to be baked for hours in the traditional buried oven. The fact that uncooked taro is actually toxic is a good motivation. We also like to fry taro slices to make taro fries, great with burgers or meat instead of French fries. But across the Great Pacific ocean, it becomes more and more difficult to buy precooked taro that is actually good. It is very often soggy, hard to eat and tastes like bread batter. They cook old taros and put them in plastic plates, waiting for hungry customers for several days. Terrible fate for such a glorious ingredient.

Because taro root is actually one of those trendy “superfood”, filled with fibers, good sugars, minerals, vitamins, iron, zinc and other good stuff. The healthy properties associated with taro include its ability to improve digestion, reduce blood sugar (you fill quickly from fibers), it helps capture free radicals that cause various types of cancers, and it is described by the most enthousiasting sources on the internet (you know how they are) as a real panacea good for good muscle, nerves, heart and immune system health. It is probably not that miraculous, but still pretty healthy…

So it’s such a shame that the good stuff is so hard to come by. Pani Chapman, a Samoan mom living in New Zealand, agrees, and shares her rant against bad cooked taro in The Spinoff : “The best way to make sure your cooked taro is good is to cook it yourself. But sometimes when you’re out shopping you just want a snack and have to buy your taro already cooked. It’s not easy to find. It seems to me that the other places don’t cook their good taro. This is just a theory but I’m pretty sure I’m right. To start with, most raw taro is good. But when it gets days old, it gets dry. And when taro gets dry, it’s not very good. I think most places try to sell their whole taros and then whatever they can’t sell, they cook it and sell it as cooked taro.” According to Pani, the only secret to good taro is getting a fresh vegetable and roast it right away. If you want to sell it, then keep it warm, and don’t try to sell yesterday’s taro.

Obviously, finding time to cook yourself is not so easy for modern workers, so hopefully the shop owners who read this piece will take action and offer some proper taro. But in the mean time, if you want to eat good taro, the only solution will often be to cook yourself or get invited to diner by a Samoan mom. Some good recipes for taro root have been assembled by Landess Kearns. You can eat taro baked, fried, in curry, as ice cream or desert… It really is a wonder-root! 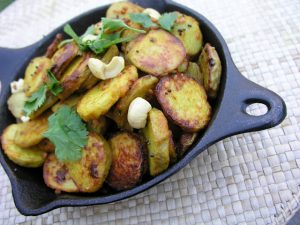