Zita Martel is a Pacific renaissance woman whose colourful, bold and courageous life serves as an inspiration to women and men in her native Samoa and beyond. In 2001, she became the first and only woman skipper to take up longboat racing, a traditional Polynesian sport reserved for men and where she still wins many of the races to this day. Her mastery of this age-old men’s sport – which she uses to coach and mentor disadvantaged youth­ – has earned her huge respect from her country’s men-folk. Check out this portrait of her by a local media:

Ms Martel is also an entrepreneur in tourism and mobile technology. To make getting around in Samoa easier, she developed and launched a travel app called Samoa Smart Guide, which has earned five star ratings on the Apple and Google app stores. 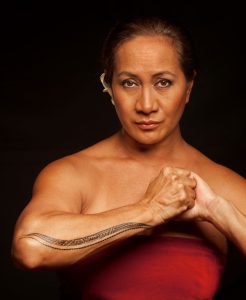 Ms Martel is a high chief, a gold medalist in the Olympic sport of archery, Consul of France in Samoa, a decorated Officer of France’s National Order of Merit, and the recipient of the prestigious Star of Oceania Awared for her courageous leadership from the University of Hawaii.

Ms Martel has used her considerable platform to speak out against the against the abuse of women and children in Samoa. When she took a passionate stand against domestic violence on a recent Facebook Live video, it garnered over 300,000 views and thousands of shares. “We should all act to end the abuse against women and children which has ruined so many innocent lives and broken up families in our Pacific communities,” she says.

This portrait of Zita Martel was first published by the Pacific Community for the 70 Inspiring Women campaign, it is reproduced here (with some modifications of our own) with their permission.

The 70 Inspiring Pacific Women campaign has been produced by the Pacific Community (SPC) in partnership with Australian Aid and Pacific Women. The campaign marks the 70th anniversary of SPC, and leads up to the 13th Triennial Conference of Pacific Women and 6th Meeting of Ministers for Women in Suva (Fiji) from 2nd to 5th October 2017.