The mobile app PacFishID lets you identify fish species from the Pacific. It was developed and is maintained by the Coastal Fisheries Programme of the Pacific Community, with money from Australia and the EU. The Pacific Community, a club of Pacific countries, created it for its fish inspectors. They use it to control the catch of fishermen for protected species or specific regulation.

PacFishID is not one of those “take a picture and the robot will identify the animal for you”. It is actually a book that has been adapted as an app, and the mobile version has the retro feel of a good species book, with tools to help you find the correct fish, ray or shark you’re looking at. One dataset (from one book, in pdf here) is currently available, titled “Common coastal food fishes of the Pacific Islands region” with 320 lagoon or coastal species. More sets will be available in the future, both as individual pdf files and in the app.

It seems very specific, but the well made app, with some quiz games, intuitive controls and a good first database, has been widely adopted by the public since it was published in late May 2017. In the fish market, after a dive or a snorkeling session, it can prove very useful! 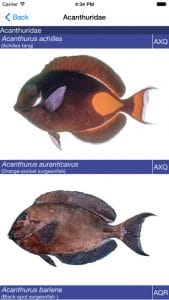 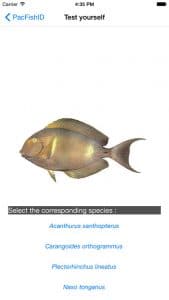 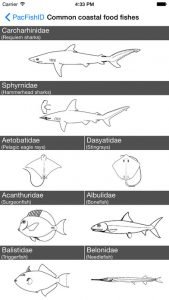